I want to SEE the Story - Damn it! ~ A RANT! ~ DESCRIPTION in your Fiction 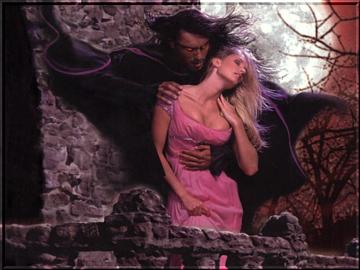 How would you write what is happening in this picture?
- How would you convey the actions?
- The characters?
- The setting?
- The mood?
(Go ahead and jot something down.)

A Writer's (& Reader's) Rant! Frustration is a BAD thing to generate in your readers. Books that frustrate (poor grammar, limp dialogue, wishy-washy action, weak description, over-blown description...etc.) are tossed against a wall. The technical term is: Wall-Bangers.
INCOMING RANT!!!
I want to SEE the Story ~ Damn it!!!

How the heck am I supposed to imagine the scene like a movie in my head without knowing what stuff looks like???

For example, you get a nice juicy sex scene and some sprightly dialogue but then you get:

‘…she went into the kitchen and got a glass of water.’


HELLO!!!
If you have to GUESS How the character got
From position A ~ To position B
You've been TOLD - Not SHOWN.

SHOW ME - Damn It!
By the time I got to the end of that book, I knew she had a living room, a bedroom and a kitchen -- but I still didn't know if she lived in a House a Condo or an Apartment! And I didn't know what was in her house other than a couch in the living room and a bed in the bedroom! (I read it because the sex-scenes were good, but there was No Other Reason to read the damned book.)
You KNOW from the sex scenes that the author knows how to write descriptive details – but it’s like she decided to be lazy! That it didn't matter as long as the sex was good. Well, she was WRONG!!! And Damn it I feel CHEATED!

No Color = No CHARACTER!
When you were a kid, the first thing you did with a new friend is check out their bedroom.

Think a minute, seriously. Why did you want to check out the other kid's room?

To see what kinds of cool toys they had sure, but also -- to find out what KIND of kid you were playing with. The kinds of toys and pictures in their room told you what Kind of Kid they were.

Think about the room the kid Sid had from the movie Toy Story.

How much of Sid's character was in his bedroom?
ALL OF IT.

Now, why would anyone leave such a gold-mine of character information -- their HOME, their Clothes, their Stuff -- out of the story?

I dunno, but it happens ALL THE DAMNED TIME.

There is way, Way too much Telling instead of Showing going on in the fiction I’m reading.
Too many stories read like a TV show with the picture too snowy to see anything clearly. Where the heck are they? What are they doing? How are they doing it? Gimme some Details! Gimme some color and textures! Some sounds! Some flavors! Some aromas!

But...! But...! But...!~~~~~~~~~~~~~~~~~~~
"Descriptive detail, like any other element of fiction, should be present ONLY to develop character or advance plot. Too much leads to excessive wordiness, which in turn kills the pacing. It's not necessary to include details the reader can be expected to assume because they are normal life events. So, someone going to the kitchen to get a glass of water would be expected to return when she was finished, and that information isn't necessary. If the next part is dialogue between hero and heroine, her return is simply accepted."
~~~~~~~~~~~~~~~~~~~~(A well-meaning and very nice editor.)


ANYTHING that isn’t necessary to tell the story
– DOESN'T BELONG in the story!
If it CAN be pulled out - it SHOULD be pulled out.

Now, on to the lecture on how to FIX this insidious problem.
"A picture is worth a thousand words."
Unless you are writing kiddie books, you don't GET a picture, you get Words to illustrate your story. USE those Freaking Words! You don't need the whole thousand words to give me the picture, but SOME would be nice. Damn it!

If you want to write Fiction with clarity, VISUALIZE what is happening in your head. Play the scene out in your imagination and view it, just like a movie. If it shows up in your mind's eye - it belongs on the page. OKAY???

Descriptive ASSUMPTIONS.
Normally, description-less fiction is Not what the writer intended. Usually it's a case of Oversight, an Assumption. The writer saw the scene in their head and jotted down a few cues that would trigger the picture that they envisioned - and ASSUMED everyone reading those phrases would see what they saw. Guess what? They DIDN'T.


The Reader always sees what THEY want to see
- unless you force them to see something else.

"They fucked, and it was glorious."
I can guarantee that no two readers (or writers) saw what I envisioned as I wrote those words.

The Writer's job is to SHOW the fucking and Convince the reader that it was glorious without actually Telling them. You have to Seduce the reader into getting all hot and bothered, so they come out of the book thinking; "Wow that turned me on so much... It must have been glorious!"

You DON'T need blocks of descriptive text to get your point across, but the reader CANNOT see what the writer is trying to show them - pictures or feelings - without descriptive cues -- preferably Sneaky descriptive cues.

No one likes to be pummeled. We prefer to be, enticed, tempted and seduced - not assaulted. A handful of well-placed descriptive words sprinkled here and there, really enriches an otherwise blank blue-screen imagination - without beating the reader over the head.

The Tricks to
-- Tight SNEAKY Description
Avoid Simple Words:
The door, the car, the tree, the house... Write instead: The French doors, the Subaru, the oak, the Victorian cottage. See how using a Specific Noun automatically pops in description?

One adjective per Noun: In addition to a specific Noun. The ornate French tapestry, the rusty Subaru, the yellow Victorian cottage.

Two adjectives per Sensation: Sight, Sound, Taste, Texture, Scent - are all perceived through the senses. The glaringly red French doors, the seductively throbbing jazz, the creamy bite of yogurt, the nubby white dishcloth, the pungent musk of wet dog.

The Not-So Dreaded -ly Words.
Every once in a while you will hear someone whine that "you shouldn't use words that end in -ly". The "No -ly words!" whiners are usually the same people that say: "Don't use Adjectives!" Think People! How the heck are you supposed to describe something without adjectives? You CAN'T.

The "No -ly Words" rule does not apply to Fiction.
This rule comes from Basic School Grammar - grammar that was intended for NON-fiction, such as Reports and other boring descriptionless education-related or business-related writing. On the other hand, Fiction THRIVES on description!

Still Feeling Guilty?
If you can find another word that says the same thing without ending in -ly, use it. If you can't, then use what you have and DON'T WORRY ABOUT IT.

Making the Reader FEEL the Passion.
Sensually-Descriptive & Erotically-charged Words
- The key to EROTICA and Romance.
If the words you choose implies a Physical Sense - sound, flavor, color, texture, aroma - you're halfway there!

So, where do you get the rest of them there what's-it words? From Trained Professionals: Other Writers.

I pulled out my favorite trashy novels and hunted down phrases that really caught my attention, and then I made a list.

Okay you got your words! Now...
How & Where do you PUT all that stuff?
Rule of thumb: The moment the character lays eyes on it DESCRIBE IT! Picture the scene in your head like a movie. If it shows up in your scene - it belongs on the page.

OTHER Rule of Thumb: Description should always reflect the opinion of the viewpoint character. Oscar the Grouch is not going to see - or describe - a field of roses the same way as Big Bird.

People
People get three whole sentences max. If you need more than that, thread the rest in with the dialogue. Think of how you see characters in a movie. THAT'S how you describe the people your character sees. Start at the top and describe down.

(Bottom to Top description implies that the brain and personality is of no importance -- only the body. Guys checking out a girl when they're looking for a fuck, look at her from bottom to top.)

Scene Changes
Every new scene should open with a snapshot of description that details the stage the action is about to happen in. No more than 60 words max. If you need more than that to describe your setting - splice it into your Action.

Location Changes
Every time the scenery changes: every new room, every new view, every new place they arrive at - gets described; so the reader can see it, and experience it too. New locations get 30 words max, because that's about how much the average person can catch in a single look. The rest of the details should be mixed in between the actions and dialogue as the character gets a better look around.

Describing the Viewpoint Character - Yes or No?
YES - DAMN IT! I wanna know who's head I'm in - as Soon as I'm in that head!

Viewpoint Characters only get three sentences just like any other person in the story. NO MIRRORS! Mirrors have been done to death. There are lots of ways to describe your viewpoint charater without resorting to a MIRROR - Use one. Not sure how to do it? Go get your favorite books and highlight the sections where the viewpoint character is described. Figure out how they did it, and do that.

DESCRIPTION ~ NOT just for pretty Pictures.
WARNING! ~ Missing descriptive cues can cause: Author Angst!
Once upon a time, when I was a beginning writer of Smut, I wrote (what I thought was) a kick ass, totally serious, "World of Grim Darkness" werewolf erotica. I had a right to think the story kicked ass. I got a lot of letters telling me so.

I got a lovely letter gushing on how much they liked my story. It was so funny! They went into detail explaining exactly how pleased they were and how witty my story was in so many places - but I hadn't ended it right. Where was the punch line?

Talk about your total author disillusionment.

This misinterpretation happened because I had written strong sarcastic dialogue, (a trademark in all my stories,) but I had left too many other cues out. It was not apparent at all, to this reader that my characters were speaking sarcastically - counter to their true feelings.

I didn't have enough of the POV character's feelings displayed through inner dialogue and body-language cues for the reader to pick up what I was really trying to show.

According to my current fan letters, I DON'T make that mistake any more.

DESCRIPTION.
- It really is the Only way to get YOUR picture across to the reader.

TEST TIME!!!
- Now - how would you describe that picture at the top of the page?
Can you make me FEEL the Passion?