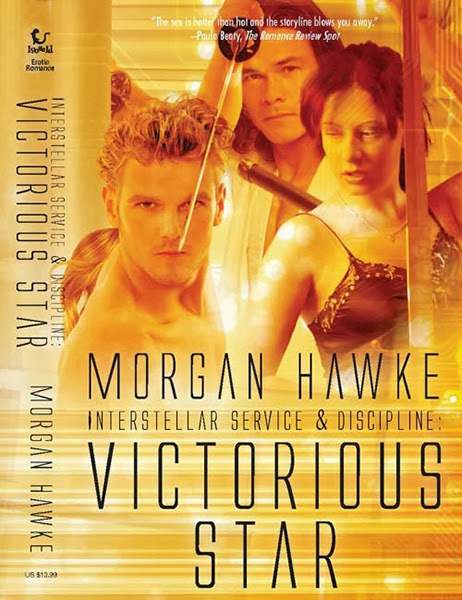 h is: When it comes to Erotic Romance PR doesn’t do diddly-squat
for sales.
Posting announcement after announcement, after announcement, after announcement,...etc, will NOT get you buyers ~ it gets you BITCHING: "Quit Spamming me!"
Seriously Hot, Well-written, Erotic Romance
Sells Itself.
Put juicy excerpts on your website, post juicy excerpts on readers' email lists and, put excerpts in your release announcements – THAT sells books.
~~~~~~~~~~~~~
Victoria stepped out of the forward lift and followed Ravnos down the hall. At the command lift her worry deepened. They were definitely headed back to the captain’s quarters. She bit her lip as the lift doors closed behind them. What the hell was he planning now?
Ravnos turned to the keypad and the lift suddenly stopped between decks. He turned back and focused on his executive officer. “Seht, do it now.”
Seht’s head came up in a froth of long white hair. “What? Here?”
Ravnos nodded. “The yeomen have dinner set. I don’t want you shocking them, should you snap.”
Seht flashed long incisors. “I’m not that far gone!”
“And I need your brain back online to make plans,” Ravnos continued smoothly. “We both know you can’t think when you’re in this condition.” He held out his hand. “I’ll hold the coats.”
Seht backed up a step and eyed Victoria. He spat out a vicious oath that Victoria’s internal translator refused to register, and jerked out of his coat. He dug at the buttons of his waistcoat.
Ravnos looked at Victoria. “Take off your coat, and remove your waistcoat.”
Victoria unbuttoned her coat. I really hope this isn’t what it looks like. She shrugged out of it and handed it to her captain. Her fingers fumbled on the buttons of her long waistcoat.
Seht pulled off his cravat, baring his pale throat. He handed everything to the captain, then turned to Victoria. His expression bordered on pain, but his eyes were nearly white-hot with leashed passion. Lust was almost a scent in the air.
Oh, shit -- it is what it looks like. Victoria could not stop her instinctive reaction. She took two quick steps back and pressed against the lift wall.
Seht moved in a blur of speed, his palms flattened against the steel behind her, trapping her against the wall without actually touching her. Heat rolled off his body, and he seemed to tremble. His mouth brushed her ear. “This is not quite what I had planned,” he whispered.
“Then let’s not do this.” Victoria shifted to slide away only to find him pressing full-length against her. His hands slid down the wall to frame her hips.
“Do you want to argue with him?” Seht tilted his head a fraction toward their Captain.
She looked over at Ravnos.
He watched them with cool eyes and a slight smile.
She bit her lip. “No, not really.”
“Neither do I.” Seht’s nod was barely discernable. “Our captain is a little too clever when it comes to retribution.” His hands closed on her skirt, pulling it up her thighs then over her butt.
She sucked in a breath and discovered that lust did indeed have a scent, and it rolled off of Seht, rich, thick, and heady. And exciting.
“Please don’t fight,” he breathed. His lips brushed her throat. “I am closer to the edge than I want him to know. If you fight, I may not be able to control my … appetites.”


From VICTORIOUS STAR
Why do excerpts work so well?
Because Sex - like Food – is a Physical need. Erotica is a snack that feeds the physical need for sex. Excerpts show the readers a taste of what you have to offer and this builds an appetite for more.

The LAST thing you want to do is give away the PLOT! If you can't post an excerpt without giving away the plot in your story - then you have one of two Serious Plotting Problems.

- Plot Problem ONE -
ONE sex scene in the entire book.

There ARE top-selling authors whose stories Do Not rely on Sex.

Mary Janice Davidson writes spectacular romantic paranormal comedies and Brenna Lyons weaves epic adventures, for example, but they are VERY GOOD, and these authors are Very Established. If a newcomer wants to compete with them, they had better be good enough to tempt the readers who are shopping for sex-books if they intend to sell a Second book.

There ARE readers who prefer Story to Sex.

Sexual Tension is NOT enough.

Adding Sex to an existing story is a BAD IDEA.

You should never put anything into a story that does not belong there -- ESPECIALLY SEX! Even I don't write that way. Every sex scene in each of my books has a reason to be there.

If boy and girl getting together IS the plot, then that story had better be under 20k. If it's over 20k then you've got a problem. If it's over 40k you have a Serious problem - NO PLOT.

If all you have is two people falling in love and nothing else, your story lacks MEAT. Sex alone does not sell to this market; they want a Good Story too!

In this jaded market, boy and girl STAYING Together --not Getting together-- should be the plot IN ADDITION to the story's actual plot-line. Technically, the Romance should be a Sub-Plot with the rest of the story trying to keep them apart.

This is a Choosy market and there are too many really talented authors that know how to weave a STORY with their Erotica and Romance. If you expect to compete for those buyers, you had better have a Meaty Plot - in addition to Love.

EXCERPTS Sell books.
Trust me; I know what I’m talking about.
You wanna do Press Releases anyway?
Then do it right.
Go To: Getting Good Press by Robert J. Sawyer