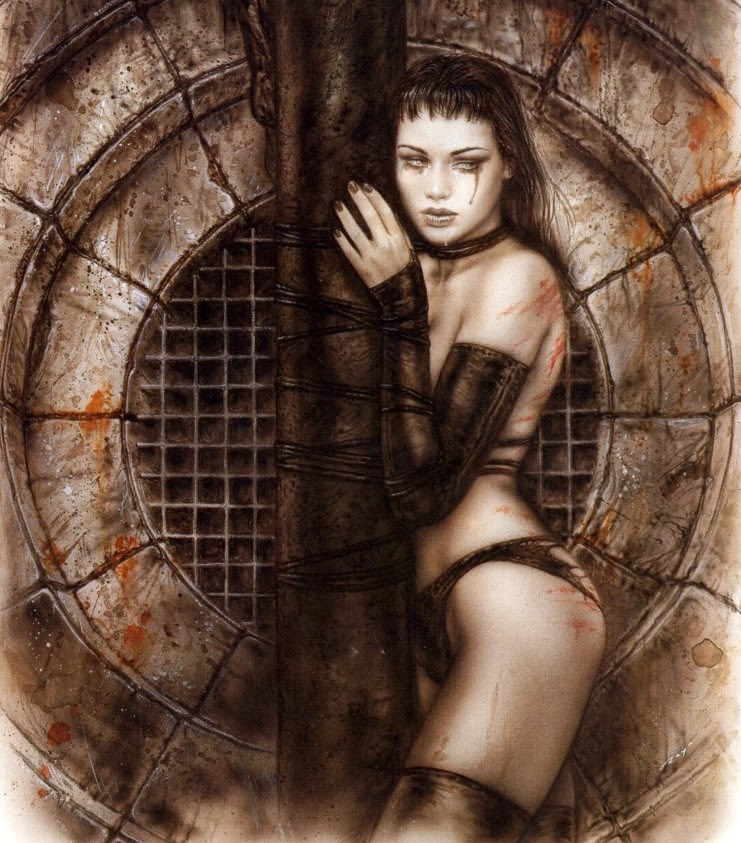 Writing Emotions VISUALLY
Visual writing is when the reader can SEE your story unfolding in their imaginations just like a movie.
This is more commonly known as SHOWING vs. TELLING.

“What’s wrong with just…Telling them?”

The problem lies with Reader interpretation. Abstract (poetic) words and ideas rely on the readers’ interpretation of what those words mean to them personally.


She was woefully depressed.

Is there a difference? -- Well yeah, birds molt, lose all their feathers, when they’re depressed. When you were woefully depressed, did you lose all your feathers? (Do you have feathers?)

Think I'm exaggerating?
-- Get on one of the book/author fan-lists and ASK. (I did.)


So, how do you SHOW emotions in Writing?

According to Dianna Dorisi-Winget in “Let’s Get Physical!”


She’s not talking about flowery, sentimental, poetic words, AKA: purple prose, she means describe the physical characteristics of the emotion you’re trying to convey.

How does one DESCRIBE Feelings and Emotions?

Emotions appear as Body Language. It’s as simple as describing the character’s body language in addition to describing what they feel physically. Don’t say: “she was sad,” describe the way her tears feel as they run down her cheeks, and the way her heart feels in her chest.

According to James Scott Bell in his article “Leave Them With Hope”:


“…the author must experience the emotion and describe (the emotion felt) with the five senses, write it as he “feels” it”.

“The trick,” Dorisi-Winget says, “is tapping into your ‘emotion memory.’ Get beyond the pounding heart and clenched fist.”


Emotion Memory is simply remembering how you felt when you were experiencing the emotion your character is going through.

Let’s go back to Depression…


Hold that thought because
this is where Characterization gets Tricky!
While depression pretty much feels the same for everyone, how people react to it is another whole bowl of kimchee. Depression affects different people very differently. Some get very quiet, some get violent, and hurt others, (picking fights) some only hurt themselves, (cutting). Some eat a lot of food, some stop eating altogether. Some throw loud temper tantrums, yelling at anything that gets too close, and others refuse to say even one word.


How would YOUR character actually React?
Describe the feelings AND the actions. Show them being depressed in all their torrid glory.


She was woefully depressed.


She leaned to one side against the wall with her shoulders slumped, staring at nothing at all. Her eyes burned with tears that wouldn’t fall. Every beat of her heart seemed to take more effort than it was worth, but somehow, it just kept beating. She was long past pain and well into numb. If only she could stay there, and never feel anything at all, ever again.

Believe it or not, TELLING the reader what the character is feeling is not nearly as effective or powerful as SHOWING them.

Exercise:
By the way, it’s perfectly okay to use one or two flowery decorative words in addition to your physical descriptions, and in Dialogue; internally, or out loud. When used to flavor Descriptions, it gives what you are describing emotional impact. When used in Dialogue, it gives your characters flavor.


Looking for a Cheater’s Guide to the physical characteristics of emotions?
The Non-Verbal Thesaurus

More on Writing Emotions?
Emotion: The Bite That Hangs On


The following is for those looking to get published.
If you’re just writing for fun and not profit, feel free to skip this part.


Is this advice
Cramping your Literary Style…?
“What about all those flowery literary phrases that everybody else uses?”
AKA: “But 'Insert Famous Author' does it, why can’t I?”

Who is everybody else? Are they alive and still publishing books, or dead?

Once upon a time, literary writing was how one got published, so naturally that’s what they teach in college. I got news for all you literary students going to class to become fiction authors: That stuff won’t get you published any more.

Outside of poetry, and high-brow literary journals, the only stuff in the Literary style being bought by the general public -- and publishers today, are Classics. We’re talking stuff that were originally called Torrid Romances, (Wuthering Heights, Jane Eyre…) Pulp Fiction, (Sherlock Holmes, HG Wells’ novels, Dickens’ novels…) and Penny Dreadfuls (Dracula, Frankenstein, Edgar Allen Poe’s works…) Stuff that was published a hundred years ago or longer; stuff that was NOT considered Literary in their day; stuff by authors that are currently DEAD.


"But! But! But what about the great literary authors still alive today...?"

"...Typed manuscripts of the opening chapters of Naipaul’s In a Free State and a second novel, Holiday, by Stanley Middleton, were sent to 20 publishers and agents.

None appears to have recognised them as Booker prizewinners from the 1970s that were lauded as British novel writing at its best.

Of the 21 replies, all but one were rejections.

Only Barbara Levy, a London literary agent, expressed an interest, and that was for Middleton’s novel. She was unimpressed by Naipaul’s book. She wrote: “We . . . thought it was quite original. In the end though I’m afraid we just weren’t quite enthusiastic enough to be able to offer to take things further.”

The Rest of the story...

Outside of poetry, and high-brow literary journals, the only stuff in the Literary style being bought by the general public -- and publishers today, are Classics.


"So, how come Anne Rice can get away with her florid and rather literary style of writing?"

Consider this, no matter what she writes, or how she writes it, she’s going to sell a million copies -- because she’s ANNE RICE. She's already proved to her CORPORATE publishers that she'll make them money with her style of writing.

Is your name Anne Rice?

No? Then, you’re just going to have to follow the publishing house rules -- just like the rest of us not-quite-famous authors.

In short, if you want to be published in this day and age, forget the expensive literary writing courses. Take a nice cheap class on commercial copywriting because that is the style of writing publishers are looking for today.


“Copywriting…?!
Isn’t that for Advertising…?”

Yes, it is. Think, what does Advertising do? It delivers its message with as much emotional impact and persuasive power as it can jam into One Sentence or less.


Copywriting teaches you to deliver the most amount of information in the least amount of words. Just think what that style of writing could do for your fiction! It’s done wonders for mine.