Modern Gothics ~ The Lure of Darkness 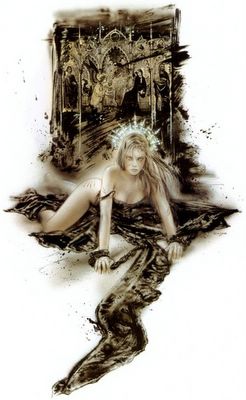 When physical reality, the world we live in, is so very terrible -- and it is, quite terrible, why do we seek out these Dark Gothic Fantasies in Fiction? Why do these shadowed stories hold such fascination for so many?

If you can't handle the Darkness...
- Get out of the Attic.

Gothic tales are metaphors, proverbs, fables, and fairy tales for Spiritual Reality; the Nature of the Soul, Goodness and Evil in its purest forms, the hidden and buried Nightmare side of the Human Psyche. The parts of our souls we don't want to face.

Ask any 8-year old how big their boogie man can get -- the longer he isn't faced.

EVERYONE has shadows locked behind the secret doors of their mind -- memories of Bad Things that happened to them, or to those they know. And the more one DOESN'T look at the darkness hiding under the bed (sexual issues), or in the attic (violence issues,) or in the basement (physical health issues) or in the closet (family issues) the bigger and badder they get.

Every parent knows, the only way to deal with Fear of the Dark, is to peer into the darkness and face what's there.

Gothics are both a warning of what lurks in the shadows, and a guide through the darkness.


Why Vampires and Werewolves
- and things that go BUMP in the night?

The Paranormal is the perfect vehicle for a GOTHIC because the villain of the piece – the Paranormal character – is a perfect physical representation, a symbol, of a dark Human Issue.

Every Gothic monster you can think of is in actuality, a symbol of a Human Issue from the dark side of the psyche.

Urban Faery = Rebellion against the norm. (This is why Urban Faeries tend to have a ‘punk’ look to them.)

(What? So, I read a lot of Carl Jung, Wilhelm Reich, Robert Anton Wilson and Timothy Leary…)

DRAMA rather than Gore...

Anything that combines magic and the paranormal (a Dark Human Issue,) and a modern, to futuristic, back-drop, is a Modern Gothic. Anything that deals with “dangerous power” is a Dark Fantasy.

However, the darkness in a Gothic tale is not expressed and defined by graphically detailed, and gruesome, violence, as it is in a Horror. The Drama of Angst rather than the Action of Violence is the vehicle of the Gothic.

Both Horror and the Gothic tales delve into the painful ‘emotionally traumatic’ secrets so Bad Things, rape, abuse, hate..., Emotional Trauma in all its forms, appear in these stories.

Sex is the most commonly used vehicle -- in both Reality & Fiction -- to deliver both Joy (love) and Despair (rape), so naturally they appear in these stories too.

But these nightmares conclude with either REDEMPTION or DESTRUCTION. The Brave save the day, the Foolish die, and the Guilty are Punished, usually horribly.


"But real life isn't so neatly tied.
Bad people get away with Bad Things."

True. Real life ISN'T so neatly tied. Bad people DO get away with Bad things. That does not change the fact that - Evil IS Bad -- and the Wicked SHOULD be punished.

Gothics are modern-day, unsanitized, fairy tales filled with the horrific punishments that the original fairy tales held: Punishment for the wicked, Rescue for those locked in the dark, and Redemption to those who have living, breathing shadows, within themselves.