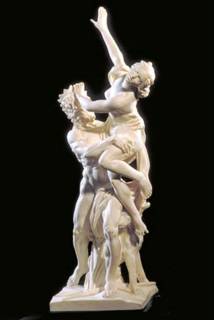 The Mythic Origins of ROMANCE
Descent into the Labyrinth
The story of True Love was defined back in the Mythic era, as were all other hero tales. Joseph Campbell exquisitely detailed the Hero’s Cycle in The Hero with a Thousand Faces, but his is a heroic journey for the male half of the race.

Nowhere does Campbell cover the journey for The Heroine with a Thousand Tears.

But the heroine’s cycle is there, in some of the first stories ever written – the story of "Innana" from Mesopotamia, the cradle of Civilization. A later rendition of this same story is the Greek "Rape of Persephone" and even later is the Roman "Psyche and Eros".
The Myth:
Both Innana & Persephone have pretty much the same story. It all starts with the loss of a loved one and/or a trusted man's betrayal. Innana goes in response to a family death – death is a betrayal of abandonment. Zeus, Persephone’s father simply allows Hades to take her.

And so, cast out or kidnapped, the heroine sets out to deal with the situation with what weapons and armor she has.

When the heroine enters the underworld labyrinth, (willingly or unwillingly) she is stripped and devoured by the goddess of death - a ravening beast of a woman, representing unbridled and violent sexuality.

There are versions where the heroine is killed and hung out to dry, (Inanna) another where she's a pampered consort, (Persephone) and still another version has the heroine working for the beast/goddess as a slave. (Eros & Psyche - In this myth both Eros and his mother Aphrodite play the sex-beast).

Somebody upstairs panics and starts trying to get her back. Unfortunately, the only thing that will free the heroine is: the beast herself, and that means somebody has to figure out what it is the beast really wants – and find a way to give it to her.

In all cases the beast is suffering from Loneliness. The beast/goddess wants to be loved. ometimes a helper upstairs figures this out; sometimes it's the heroine herself.

Sympathy for the beast is expressed, and the heroine is allowed to revive / return - under a condition. The heroine must return or supply a substitute - a sacrifice.

The heroine makes her promise and begins her journey back to the surface. But the heroine has seen the darkness and assumed a part of it into herself, usually involving a second betrayal, (pomegranate seeds anyone?) So, when she comes out of the labyrinth, she's not a pretty sight, in fact she's near bestial herself. There is no hiding where she has been.

The heroine goes home to find: her betrayer.
One of two things happens - if he is unworthy, she kills him. If he has suffered because of his betrayal she forgives him. Either way, the betrayer suffers.

After that, the heroine wraps up her affairs, and willingly returns to the labyrinth or somebody else willingly goes in her place - and the beast isn't lonely any more. The end.

Think carefully.
Where have you heard this story before?
Try these on for size:
Beauty & the Beast
Red Riding Hood
East of the Sun West of the Moon
Vasilisa & Baba Yaga
Mother Holle (Mother Holy?)
And every Romance novel you ever read.
Every Romance written focuses on:
“Physical Love and the Importance of Trust”.
Tell me again that Romances serve no purpose.
I Dare you.
The Filthy TRUTH about Real Sex & Real Love
Sexuality = Need for Love? NOT!I have had more than one woman read this article and complain bitterly that this cycle implies that a woman can't live without a man's love. If that's the message you came away with - YOU are Not Paying Attention!
This cycle is about Accepting the Body's need for Physical Love.
Accepting that you are Sexual
- does NOT mean you Need someone to Love.
This isn't the Victorian Era where people died of old age while still virgins. This is the modern Era where sooner or later Everyone Has Sex.
Acceptance of one's Sexual Nature does NOT mean that they MUST find someone to Love. One does not need a Significant Other to be Sexual. I don't have a Significant Other in my life and I'm Quite sexual, thank you very much.
Oh, and while we're at it, no matter what the Romance novels tell you, physical attraction does not mean you are in love. (Guys already know this.)

The acceptance of ones sexual nature - Male or Female - means the acceptance of the Physical Body's driving needs. It means accepting the fact that your body is an animal, like every other fur-wearing critter out there. And All animals have the same Physical needs - Food, Shelter and Sex.

You think all those copulating animals KNOW they're getting pregnant? Not Hardly! They just know that it's that time again where they get to make whoopee! Puppies and kittens are just that other thing that happens in the spring.

Humans, clever beings that we are, know how to avoid pregnancy and STDs, so we can enjoy our Sexuality without having kittens in the spring. Isn't that nice?
The point of this Mythic Cycle is - if you are going to have sex, TRUST who you have it with! Because there are ALWAYS Consequences! - Physical and Emotional.
Want ALL the dirty details?
Go To: The Filthy TRUTH about Sex verses Love - In Fiction
~~~~~~~~~~~~~~~~~~~~~~~~~~~
Using the ‘Heroic Cycle’ for Writing:
~~~~~~~~~~~~~~~~~~~~~~~~~~~
A heroic cycle is best used as a guide for Character Arc, describing the emotional lessons learned in addition to the events (plot) that occur in a story.
Unlike the traditional heroic journey, my Heroine's journey focuses on the mythic cycle of the female, or more precisely, her introduction and acceptance of her sexual nature.
~~~~~~~~~~~~~~~~~~~~~~~~~~~~~~
Stages of the Heroine's Mythic Journey
~~~~~~~~~~~~~~~~~~~~~~~~~~~~~~
- Abandoned
Something emotionally important is stolen or destroyed
Betrayal by a loved one - father / brother / lover
Into the Wasteland - Donning Armor and Sword
The Beast Guide - Hidden Sexuality
- Within the Labyrinth