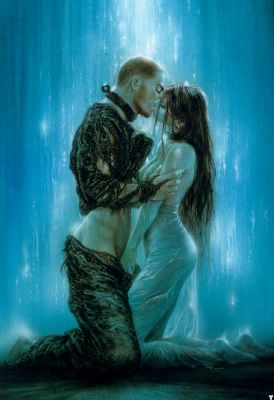 The Characters
The Heroine must be able to stand toe to toe with the hero and the Hero must be written in such a way as to have the readers fall in love with him. The Villain must actually be Villainous. A weak Villain makes for a weak plot. Realistic behavior and dialogue are the keys to strong characters.

The Plot
Something happens to fling the Hero and Heroine together. While dealing with the unusual circumstances, they fall violently in lust. Shortly before the main climax, they both realize that it's not just lust, its love. During a life or death climactic scene they admit their love. They finish out the story by straightening out all the rest of the story’s loose ends and close the book in one hell of a final sex scene that cements their relationship.

Erotica is driven by its sexual action. Drama is non-existent, because the ACT of sex is the centerpiece of the story.

The reason for the addition of Action-Adventure, is that Sexual Action needs other types of Action to balance the story out, or the Reader skips everything in between "to get to the good parts". The Emotions of love and angst have to be there, or the story is not a Romance, but the Drama is not nearly as detailed as in a common ordinary Romance, because Drama bogs down Action.

Think of every cool adventure story in ANY GENRE you ever read, or saw in the movies that could have been spiced up with a bit of romantic hanky-panky.

What If ~ We change a few names and details…?

What favorite Movie or Adventure story would You like to see rewritten as: Women’s Adult Adventure Fiction?

If the Sex or the Relationship or the Adventure can be removed without harming the actions of the Story - the Plot - then you did it WRONG.

First Law of Fiction:
If you can tell the Story without it -
then it SHOULDN'T be in the Story.


Adding Sex to an existing story
is a BAD IDEA
You should never put anything into a story that does not belong there - INCLUDING SEX.

Sex should NEVER be Gratuitous--something added for decoration, like sprinkles on a cake. Adding ANYTHING gratuitously (a little sex just to make it hot, a little romance, a little mystery, a little fantasy, a little Sci-Fi, a vampire...) to appeal to an audience or a publisher, is CHEATING! It's the sign of a Lazy Writer, someone who didn't bother to find a way to make everything work together.

All Too Common PLOT PROBLEMS

Plot Problem ONE
ONE sex scene in the entire book.

Sexual Tension is NOT enough.

There ARE top-selling authors whose stories Do Not rely on Sex. Mary Janice Davidson writes spectacular romantic paranormal comedies and Brenna Lyons weaves epic adventures, for example, but they are VERY GOOD, and they are Very Established. If a newcomer wants to compete with them, they had better be good enough to tempt the readers who are shopping for sex-books.

- Plot Problem TWO
Boy Gets Girl - IS the plot.

If boy and girl getting together IS the plot, then that story had better be under 20k. If it's over 20k then you better have a LOT of Sex to make up for it. If all you have is two people falling in love and nothing else, your story lacks MEAT. If the story is over 40k you have a Serious Problem, sex or no sex, you have NO PLOT. Sex alone does not sell to this market; they want a STORY too!

In this jaded market, boy and girl STAYING Together --NOT Getting Together-- should be the plot in ADDITION to the story's actual Adventure plot-line. Technically, the sexual Romance should be a Sub-Plot with the rest of the adventure story trying to keep them apart.

This is a Choosy market and there are too many really talented authors that know how to weave a attention-grabbing STORY with their sexual Romance. If you expect to compete for those buyers, you had better have a Meaty Plot - in addition to lovingly detailed Sex.